God Of War: The World Outside 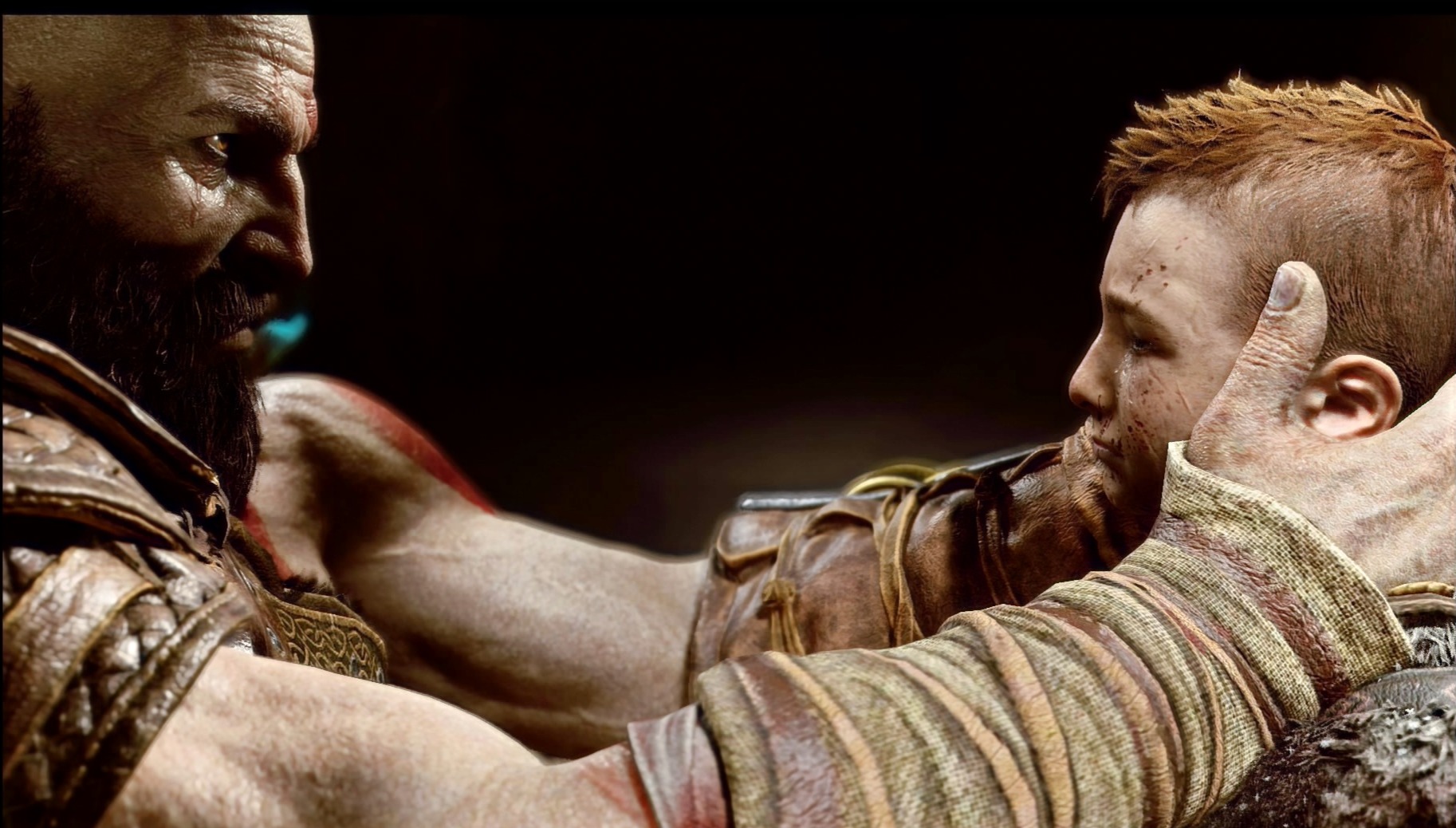 It's A Cold, Cruel World

What would you do if you were put in a life or death scenario where someone else was attempting to take your life? What if it was threating the life of someone you loved? Have you ever pondered the thought of taking another life purely for survival, should the situation arise? What about hunting? Would you kill an animal in the wild in the name of survival? Do you value the animal's life as much as you would value human life?

Most of these questions have probably run through your head as hypotheticals once or twice in your life or maybe you spend a lot more time thinking about it than you'd like to admit. There is no wrong answer to these questions as each answer is purely your own, built by your own world views, and your own personal experience. Everyone is different in how they view the world but I'm sure we can all come to the conclusion that it is, in fact, one cold, cruel world out there.

It's no different for the fictitious world that you journey through as Kratos and his son Atreus. If you're familiar with the God of War franchise then you'll know that Kratos is no stranger to how cruel and unforgiving the world can be but in this new story arch that involves a child, Atreus has yet to experience the harsh realities of the world beyond his home.

After witnessing a beautiful funeral, a long hunting expedition, and a badass fight marathon, I embarked on what was the inevitable journey to spread the ashes of my deceased wife on the highest point of the nine realms, which you can read more about here. Unfortunately, shortly after leaving the safety of our home Atreus is exposed to the forces that made up folklore and fairytales his mother used to teach him. Forcing him to have to ponder some of these questions I mentioned at the beginning of the article. Not necessarily hard questions to consider but questions no 10-year-old should have to seek out the answers to.

Atreus, being like any 10-year-old child, is curious, concerned, empathetic, and pure in nature. For example, during the tutorial, there is a scene right before a small boss battle where Atreus struggles to finish off the deer he's injured because he can't fathom the thought of willingly taking the life of another living creature in such a vulnerable state. However, later, he's quickly put in a situation where it is, in fact, life or death, to which he has no choice but to act or die. Staring death right in the eyes (literally) takes this scene, accompanied by the beautiful score by Bear McCreary, to a whole different level. At that moment you see, I felt, the child-like innocence just vanish and reality starting to settle in.

Not only that but, with few words, showing Kratos actively comforting his son while appreciating the strength and quick decision-making skills gives the player, or me at least, a sliver of hope for what is to come. The compassion, comfort, and sense of pride when he mutters, "Close Your Heart To It." might seem disingenuous to most, provided the context, but it's about the only form of affection he has shown toward his son up to this moment. I believe that, although he's keeping secrets from Atreus, he values Atreus as much as any father would value their own son and more so now that his wife is gone. He's all he has left of his wife.

The Witch & The Serpent

Realistically, I've probably been playing the game for around 45min to an hour, but, after the heart-wrenching storyline I've been introduced to, I'm definitely in need of a palate cleanser. Thankfully the writers come through with one of few allies you meet early on in the game.

Brok, a trusty blue-dyed dwarf, is basically forced into your narrative because he's literally blocking your pathway to the mountain. But, lucky for you, you have yet to realize how important he, and his brother Sindri, are to you. There's not much to be said about this sibling rivalry, which you always seem somehow intertwined within, but they do what dwarves do best. Craft the latest and greatest in armor and weaponry. Hesitant to trust this foul-mouthed dwarf, Kratos is quick to dismiss him after Atreus helps Brok and his 'pack mule' cross this bridge but once he mentions a very distinct branding on the lower handle of The Leviathan, your tone begins to shift. If you stick around long enough to 'chat' with Brok after he upgrades your ax you'll definitely be in for a chuckle or two as his delivery on certain topics and how he handles people is very tongue and cheek. But don't worry - we'll see him again. After fighting your way through another horde or two of enemies as you journey on towards the mountain, you find yet another teachable moment as a father as you spot a boar just off in the distance. Missing his first shot but landing his second you encourage Atreus to not let his game flee. Excited by his potential catch, Atreus scurries away into the fog as you pick up his mother's knife that he dropped unknowingly. You are then only guided by his voice, and another more aggressive voice, as you become more and more panicked slowly realizing the fog intwined maze has all but taken your son from you. What came next almost took my breath away, which actually comes later.

The gray, blue, black, and white color pallet that you were introduced to at the beginning of the game up until this point was very bleak and unexciting. But as you close in on Atreus's voice, accompanied by this stranger, the color pallet takes a refreshing turn. Greens, reds, purples, browns, oranges, basically every warm color you could think of hits the screen like Monday morning after a weekend of partying. 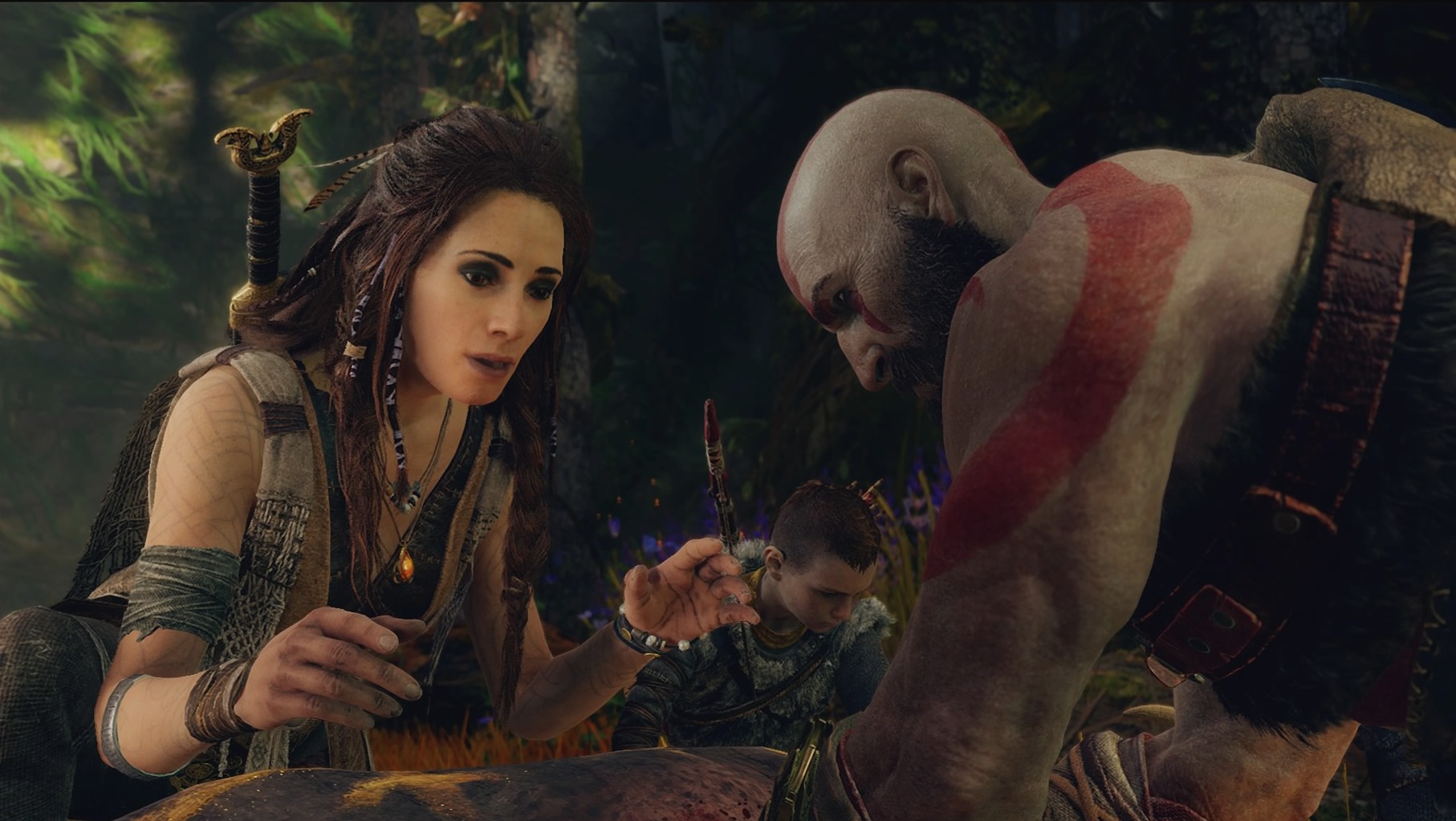 However, the colors may be bright and beautiful but the situation is not. Atreus and this stranger, a woman, are found hovering over top of the boar that Atreus just shot. As you approach the scene you're quickly thrust into another interactive cinematic where you are 'performing surgery' to keep this magical boar alive. Scolded that you did not use this as a source of 'survival' but a source of 'target practice'. The Witch is not impressed.

Now we start getting into the massive scale of what is to come in this game. The scale of the world that I've only heard about and [briefly] seen from old PS2/3 gameplay. As you're coerced into helping The Witch carry the injured boar back to her home, you're greeted with a GIANT treehouse. But this is no ordinary treehouse. It's a massive treehouse UNDER A

TURTLE. If I'm being honest, it took my mind a minute to really comprehend why and how the tree was moving because the developers and artists at Santa Monica Studios did such a great job with the detail you'd BARELY be able to tell that it was a living breathing house, I mean, until you have to walk directly under its gullet. 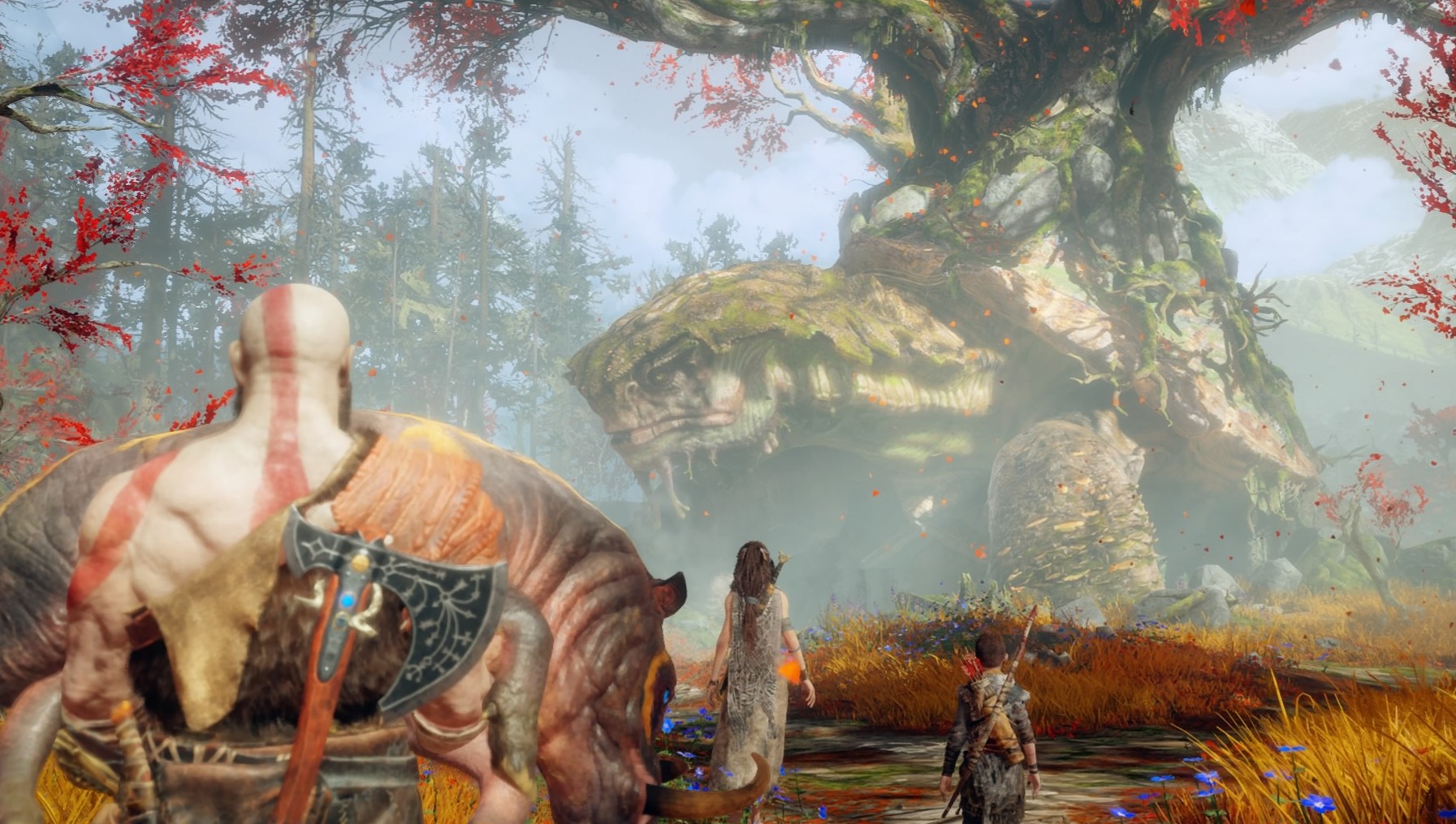 Then, just as the Stranger did before, The Witch calls Kratos out on who he really is warning him that his journey will not be easy if he doesn't inform Atreus of his father's life before his own. However, there is something about The Witch that he seems to like. Is it Atreus's immediate connection to her in the wake of his mother's death? Is it the soft-spoken nature and gentle heart you see in her that reminds you of your son? She doesn't threaten your immediate safety and, like you, is concerned for your sons well being. Who is she? What does she have to offer? Why was she so open to outsiders? (*I'm using 'open' very loosely here, you did just shoot her friend*)

After you help her get her friend (the boar) back to full health she then repays you with a symbol of 'protection' and offers you a 'safe' way to the surface to further your quest to spread your wife's ashes. Traversing through this mystical, creepy, and 'not-as-safe-as-she-promised' cave you find yourself back on a boat rowing out of the cave to a wide-open body of water.

Cool, I thought, what now? I got this big ass body of water and I'm right on the checkpoint where I need to be. Hello? Is anyone home? I should really learn to be a bit more patient when it comes to (semi) linear story-telling because I always seem to speak too soon. Just as I think I'm rowing into nothingness, another cut-scene. And when I said earlier that my breath was almost taken away by the introduction to The Witch, I was saving it for what was to come next.

As I've vaguely mentioned before, I don't know much about Norse mythology nor the God of War franchise (which normally would deal with Greek mythology) but I have briefly heard of the Worlds Serpent. A snake-like serpent that is so massive that it's wrapped around the earth; so massive, in fact, that he has to consume a part of himself in order to fit around the earth. That's a pretty massive serpent if you ask me. But not only was his reveal BADASS but the question that plagued my mind for a while after seeing him was the voice. But, Playstation is always a million steps ahead of the consumers and already made a BTS video about some of the iconic sounds that make up God of War (World Snake included).

But tell me this isn't the most BADASS creature reveal you've EVER seen?

Once I was able to catch my breath again after hearing and seeing this behemoth first hand, it was back to the mission at hand. Revealing more than what met the eye at first glance, the serpent had revealed to us this MASSIVE world for us to explore that was literally right beneath our boat. Cue me (again) not following the story IMMEDIATELY and having my open-world side shake in excitement as I explore hidden pathways, enemies WAY too powerful for my level, and hidden treasures among this seemingly endless body of water.

But, it didn't take me long to realize that I couldn't do much in the world (yet) as I haven't reached a high enough level, have the proper gear, or pathways hadn't been revealed to me. So, as much as I didn't want to, I proceeded on with the story and trecked on to the mountain. The highest point of the nine-realms. And let me tell you, I had no idea what I was in for or what was to come.

Be sure to tune in next week as I give you a glimpse of my journey up the mountain! Should you have any feedback, I'd love to hear it! You can follow me on most social media, just seek me out! I'd love to chat! And finally, depending on how the story plays out, I might have to space out the posts to once every two weeks instead of once a week. Since I don't want to give away EVERY detail, I want you to enjoy the game if you haven't already.

*A few extra screen-captures showing how MASSIVE this game is* 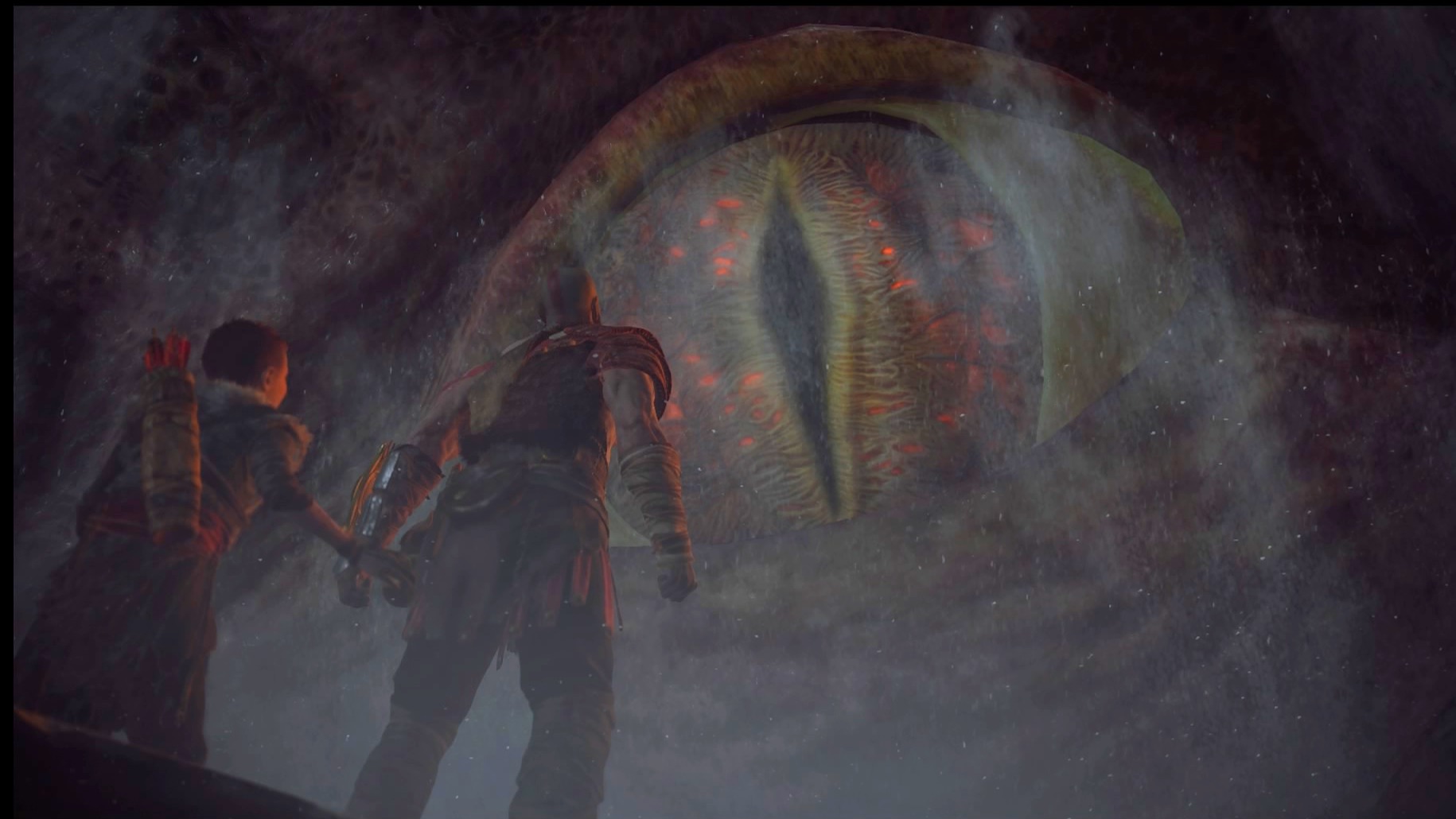 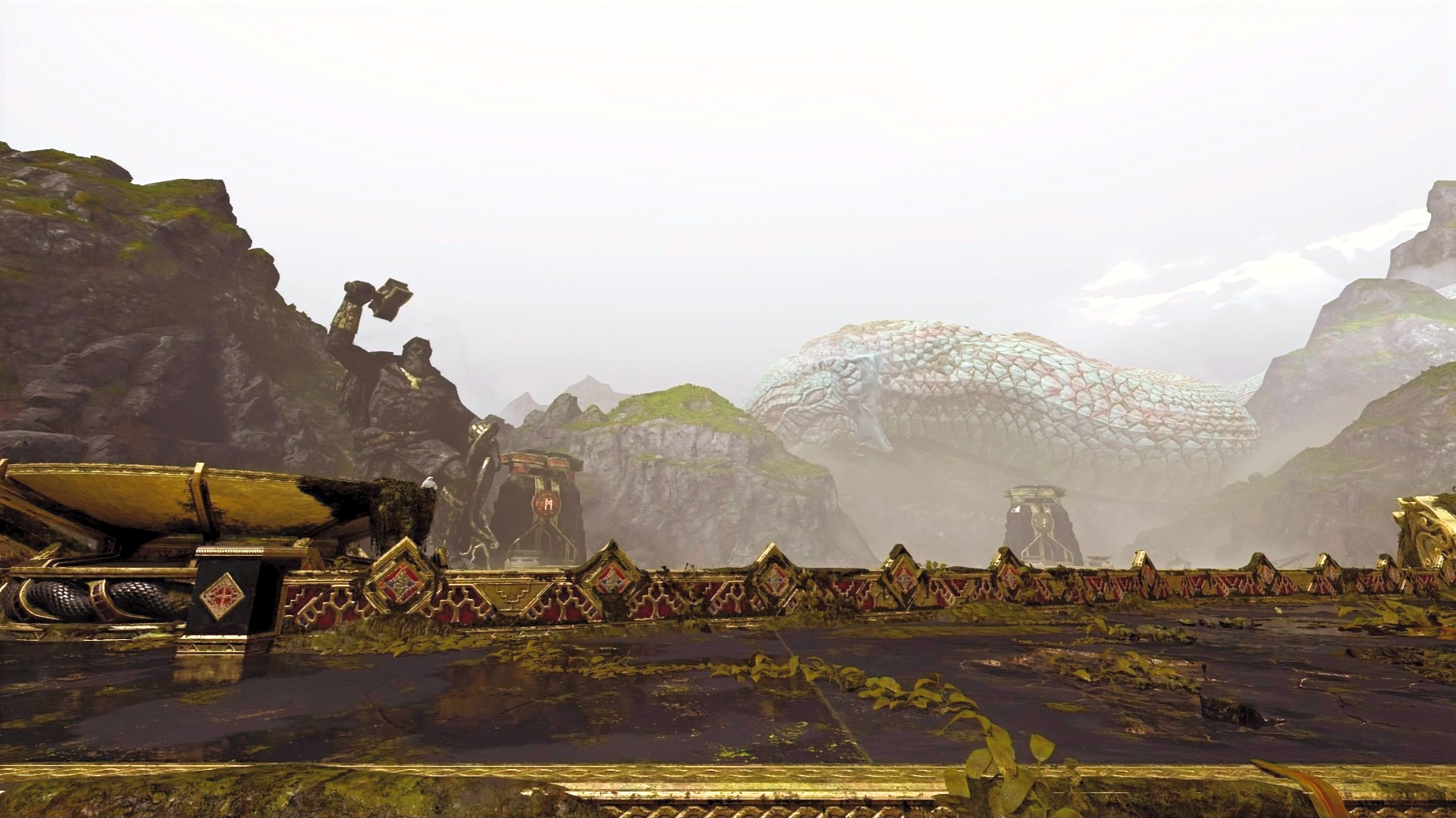 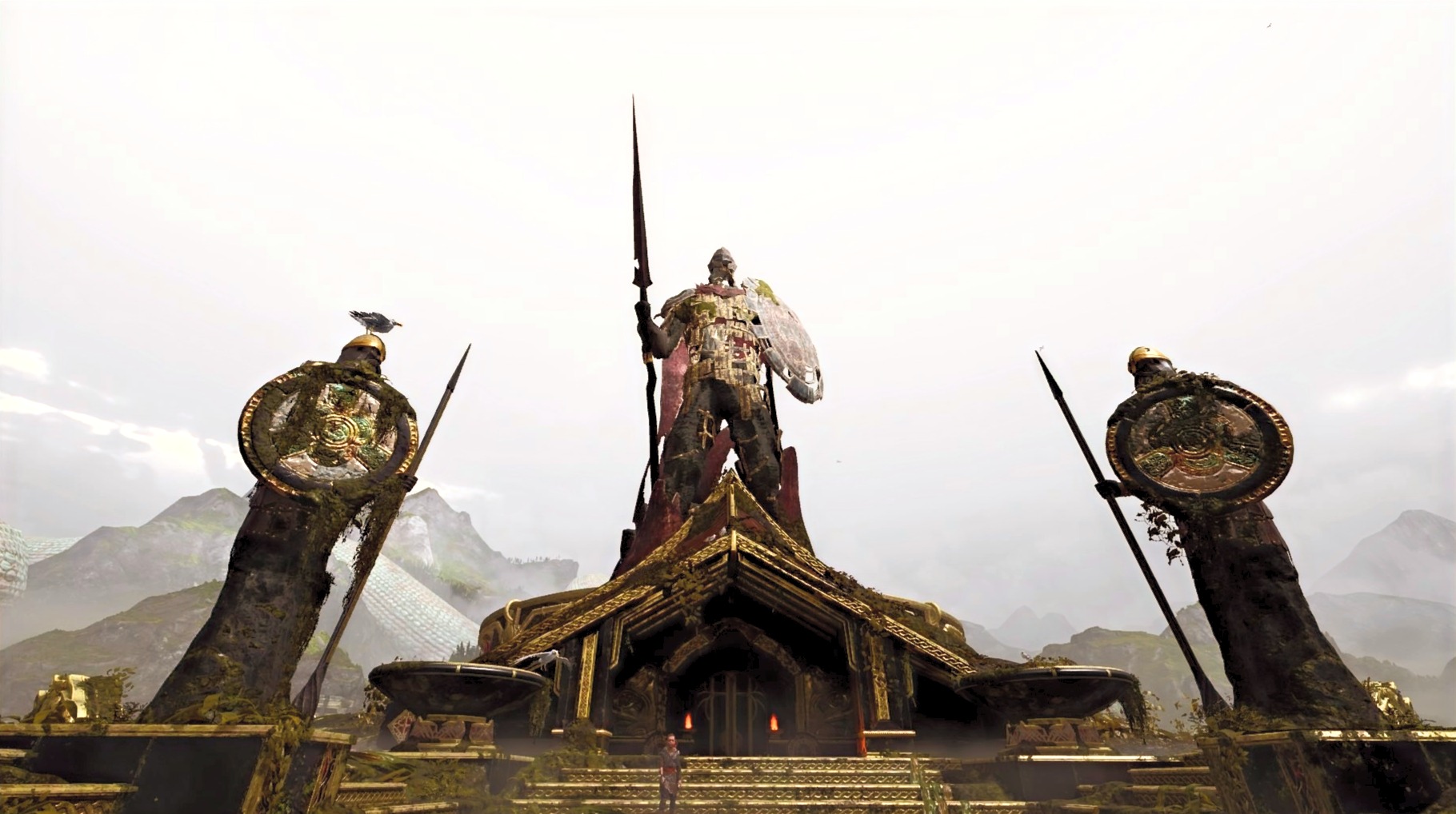 The Audible Chaos of Uncut Gems

God Of War: A Journey Begins

The Very Late Gamer - A Series